ROBERT KING is widely acclaimed as one of the leading British conductors of his generation, enjoying for 40 years a dynamic career across the globe in an unusually varied range of repertoire spanning five centuries.

Born in 1960 he was a chorister with the Choir of St John's College, Cambridge, where his solo performances included a best-selling recording of Duruflé Requiem. Whilst at Cambridge University in 1980 he founded the period instrument orchestra and choir The King's Consort, with whom he has toured in almost every European country, North and South America and the Far East. He made his BBC Proms conducting début in 1991 and has since been invited a further seven times. He has made more than 100 recordings which have sold 1,500,000 CDs and won many international awards. He now records for the VIVAT label.

Robert King's repertoire, besides especial acclaim for his interpretation of baroque music, also includes a wide spread of classical and early romantic works, both symphonic and choral, with a particular focus on the music of Mozart, Haydn and Mendelssohn, and a continuing specialisation in early twentieth century English composers, in particular the works of Vaughan Williams, Stanford and Parry.

King is widely regarded as a leading expert on the music of Henry Purcell: alongside extensive recording editions of the composer's music he was Artistic Director of Wigmore Hall's Purcell Tercentenary Festival and the author of 'the definitive biography' of the composer. He is a frequent broadcaster for the BBC, writing and presenting diverse programmes. In the world of film music King was a music consultant for Ridley Scott's epic Kingdom of Heaven and his harpsichord playing can be heard in the hit film Shrek 2; other Hollywood projects include work for The Chronicles of Narnia, Pirates of the Caribbean, Flushed Away and, assisting award-winning composer Hans Zimmer, The Da Vinci Code.

Recent performances include major European tours of Handel Messiah, Bach St Matthew Passion, Bach Mass in B minor and The Coronation of King George (also recorded for DVD in Versailles), the Requiems of Mozart and Michael Haydn in Lucerne, Mendelssohn Paulus at Leipzig Gewandhaus and at Enescu Festival in Bucharest, Haydn The Creation at Flanders Festival, Finzi Dies Natalis and Britten Les Illuminations at Wigmore Hall and in France, Purcell The Fairy Queen, King Arthur and Dido and Aeneas in Theater an der Wien and widely on tour, Mendelssohn’s 1833 version of Handel Israel in Ägypten at Leipzig Gewandhaus and the festivals of Rheingau and la Chaise-Dieu, alongside tours to Austria, Belgium, Denmark, France, Hungary, Malta, Mexico, the Netherlands, Portugal, Romania, Spain, Switzerland and Spain. New CD recordings, following his Gramophone Award nominated disc of sacred music by Stanford and Parry for the VIVAT label, include music by Purcell, Couperin, Handel, Mendelssohn, a much-lauded disc of British Romantic music, A Voice from Heaven and his most recent disc, the first volume of Purcell Royal Odes. 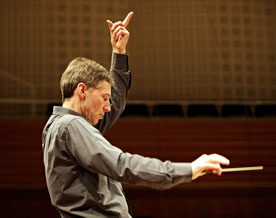