Besides her wonderful musicality – she sang soprano just as beautifully as she played the recorder – and elegantly vivacious presence on stage, Emma was one of the kindest and most thoughtful of all colleagues during the 25 years during which we worked together (writes Robert King). Emma played dozens of concerts and recordings with TKC that make up the orchestral and chamber recorder player’s repertoire mix of countertenor duets, Brandenburgs, twinkling descants in individual movements of Vivaldi and Purcell, and suchlike. Every time, she lit up the wind section with her radiance.

Just once her usual faultless multitasking organisation let her down. Giving Emma a lift to a chamber concert we were to play in north France later that evening, having chatted about this and that for an hour and more, as we got close to the channel tunnel check-in, I casually mentioned passports. A gasp of horror from my left: Emma had left her passport at home. A combination of taxis, train back to London, husband rushing passport to terminal, a Eurostar to Paris which fortuitously would also stop at Calais, our French manager picking her up and driving at some speed to the concert venue, time for just a couple of minutes on stage before the audience arrived (we’d covered her absence during the afternoon from the concert promoter whilst we worked out what on earth we would do if she didn’t get there in time), once on the platform Emma was completely serene.

I still remember the enthusiastic shout at the end of the concert from one audience member who had rightly been captivated by the spirited playing (and perhaps also the glamour) of our two lady recorder players. Over the applause we heard a loud cry of “Les Oiseaux”. And, to the infinite sadness of everyone who was honoured to know her, Emma has now flown, far too early, to the great recorder consort in the sky. 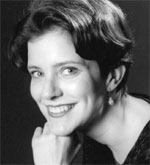